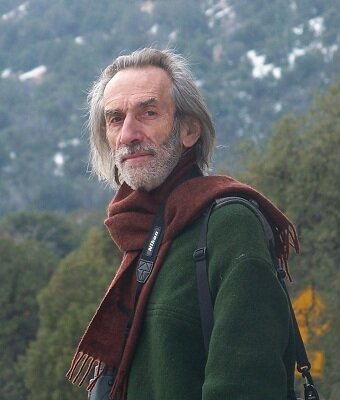 Born in Austria in 1948, David Chorlton grew up in Manchester, close to rain and the northern English industrial zone. In his early 20s he went to live in Vienna and stayed for seven years before moving to Phoenix with his wife, Roberta, in 1978. In Arizona he has grown ever more fascinated by the desert and its wildlife. Much of his poetry has come to reflect his growing concern for the natural world. In 2008, he won the Ronald Wardall Award from Rain Mountain Press for his chapbook The Lost River, and in 2009 the Slipstream Chapbook Competition for From the Age of Miracles. Other poetry collections include A Normal Day Amazes Us (Kings Estate Press), The Porous Desert (FutureCycle Press) and Waiting for the Quetzal (March Street Press). The Devil’s Sonata (FutureCycle Press) appeared in 2012, and in 2014 the same press published David Chorlton: Selected Poems. He is represented in Fever Dreams (an anthology of Arizona poets from U. of Arizona Press), New Poets of the American West (Many Voices Press), and has a poem in BIRDS, an anthology from the British Museum. His A Field Guide to Fire was part of the Fires of Change exhibition, a collaboration of artists and scientists addressing the role of fire in forest management in the age of climate change. He translated poems by the Austrian Christine Lavant, which appear as Shatter the Bell in my Ear from The Bitter Oleander Press in 2017.

Bird on a Wire